Targeting is an important strategy for reaching the poor in the first place. In MBK, all clients are women. Some 75 percent of these clients came from low-income families below the official poverty line, as estimated by (a) the modified CASHPOR housing index, and (b) per capita income below the official poverty line. The average outstanding loan size of MBK clients was around Rp 700,000 ($75) in 2009. This amounted to just 3 percent of Indonesia’s per capita Gross National Income of $2,200 in that year.


To monitor and evaluate MBK’s impact on income, poverty and living standards, MBK commissioned two client surveys from the Business School of the State University of California, Northridge. The first survey was undertaken in 2005 and the second in 2008. The results of the more recent study are briefly summarized below, involving 287 clients selected randomly and 201 control respondents. The average income of clients increased by 22 percent between working capital cycle one and two, and again by 23 percent between cycle three and four (figure 1). 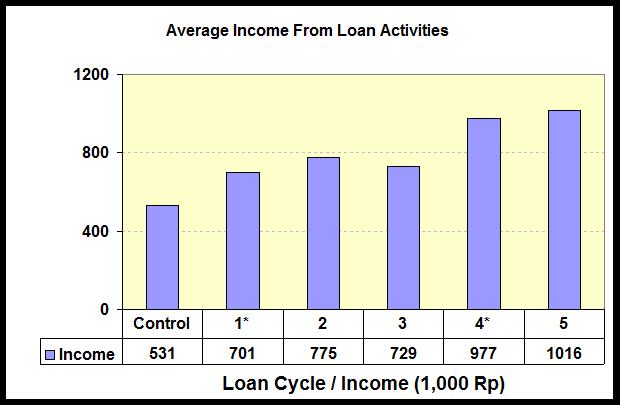 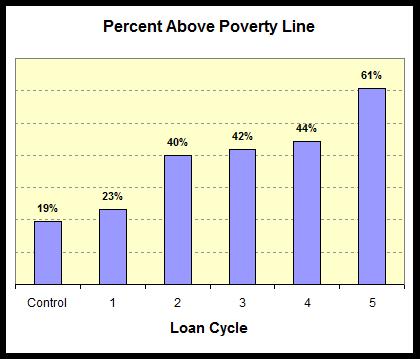 
Poverty incidence also improved substantially in this period. The number of persons above the poverty line increased from around 20 percent to 61 percent between the first and fifth cycle in the programme (figure 2).


The housing status of the clients showed marked improvement between cycle 1 and cycle five as shown in the graph below (figure 3). 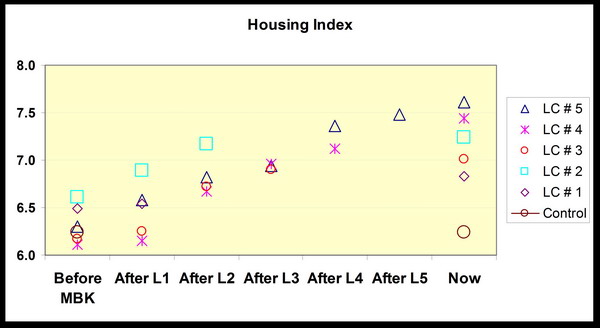 
Some limitations in the above client survey must be kept in mind. Only existing clients were interviewed, and not drop-outs, so the study suffers from some self-selection bias. However, the number of clients dropping out of the programme was small (5 percent per year after the first year). Also, it is a difficult task to design an adequate control group. The control respondents in this survey were selected based on their proximity to clients and from a similar socio-economic background as gleaned by their housing status, and not using more sophisticated screening tools. Nevertheless, the survey was able to document concrete and significant benefits in terms of improved incomes, reduction in absolute poverty, and improvements in the housing conditions of a randomly selected, relatively large sample of MBK clients, chosen to represent the programme through five one-year cycles. Moreover, the results were quite consistent with those of the previous survey undertaken in 2005.